Chardonnay wine is for lovers at Feast Portland 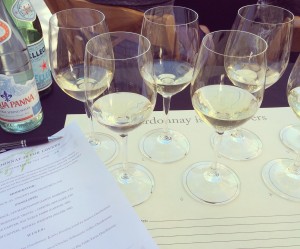 It’s been said “All you need is Marvin Gaye and Chardonnay.” Local producers here in Oregon agree. They’re making some of the best Chard out there and it’s not at all like yo mama’s favorite buttery, oak bomb. Instead it’s an elegant, fresh take on America’s #1 white wine. Let Bon Appétit’s Wine Insider, David Lynch, lead you through a tasting of some of the state’s best bottles and show you why Anything But Chardonnay is no way to drink.

With that kind of an introduction in the Feast Portland program, who would miss this technical tasting, held under a canopy of trees near the entrance to the Portland Art Museum? Moderator David Lynch and the entire panel of chardonnay experts had an easy banter, making them both instantly endearing to those in the seminar. It was fun to watch and made the audience of tasters feel a part of the conversation.

As the clock struck noon, we sat down to seven glasses of chilled chardonnay, all made by Oregon wineries, using Oregon-grown grapes. Two of the samples were from the 2011 vintage, one that was cold with very late blooming vines– the type of harvest that makes winemakers visibly cringe when mentioned. The others were all from 2012, also an unusual vintage that most Willamette Valley winemakers recall as pre-rain, during rain or post-rain. Harvest was pierced down the center as the remnants of a typhoon hit during its midst, quickly dumping inches of rain on the vineyards.

These years challenged our state’s winemakers, all of whom seem to possess a deep-rooted pioneering spirit that helps them roll with nature’s punches. For the love of terroir, we who appreciate Oregon wines get to reap the rewards of our toiling winemaking friends. Two very different vintages– yet both produced stellar wines.

During the seminar, Bon Appétit’s David Lynch described nearly all the wines in the tasting as being nervy and electric in the mouth. Due to our warm days and cool nights, grapes grown in Oregon develop a higher acid content than those planted to the South. Temperature shifts of 40-50 degrees Fahrenheit from the heat of the day to the coolest part of the night promote acid development and that acidity is what Lynch described.

Also mentioned was that the 2011 Chardonnays are lean and the 2012s can only be described as fat. The definition is truly accurate. Chardonnay lovers should open up these vintages side-by-side and taste the differences.

Doug Tunnel, a former CBS news anchor who returned to his childhood home and established both figurative and literal roots, started this label and makes this wine. His 40-acre vineyard is planted with Pinot noir, Gamay noir and Chardonnay. This wine had some oak treatment and has aromas of lemon, grapefruit and a whiff of new carpet, combined with citrus flavors of grapefruit and lemons. You can practically taste the many minerals from the vineyard site. It has a pleasant, full mouthfeel and citrusy finish.

Evening Land is unique in that they make wine in Burgundy, Oregon and some cooler regions of California. This chardonnay, from the Seven Springs Vineyard, is a mix of fruit from both older and younger vines. As one swirls the glass, notes of rosemary and other green herbs tickle the nose. The flavors are bright and lush with lemons and grapefruit. If you like textured wines, this one is very supple and pleasing with a nice acid backbone without being oaky.

Started by Harry Peterson-Nedry in 1980, Chehalem Wines always seem to have nice acidic structure to them. Harry and daughter Wynne Peterson-Nedry work side-by-side, running the business and making the wines. Harvested from their estate vineyards of Corral Creek and Stoller, this wine is bright and fresh with the heady perfume emitting from a big bowl of limes. A chardonnay for acid-lovers, it delivers mineral notes that overlay citrus flavors of lemons and lime zest. Without any oak, this chardonnay is structured and very terroir-driven.

Tyson Crowley spent many years working under a number of Oregon master winemakers, including Doug Tunnel of Brick House Vineyards, before following the beat of his own wine drum. Possibly the smallest producer in the tasting, Crowley focuses on minimal interference. This chardonnay spent over a year in neutral oak barrels but one finds barely a whisper of its influence. With aromas of lemons, green apples and a whiff of oak, this wine has an unusual salinity, paired with lime zest. In the mouth, this tart burst transitions nicely into a kiss of oak on the finish.

Chardonnay has been a cornerstone varietal since the beginning of Bethel Height Vineyard’s existence. The co-founder’s children Ben and Mimi Casteel have taken on the responsibilities of winemaker and viticulturist for the family run business. Mimi Casteel is serious about her vines and has a passion for Oregon chardonnay that may rival anyone else in the state. Their chardonnay had aromas of oak and candied lemons with flavors of Asian pears, lemons and an oak prominence that gave way to a crisp lemon zest finish.

Brian Marcy and Clare Carver have a dream of planting their own vines but until that time, they source fruit from several nearby vineyards. This wine is blended with fruit from three locations, one of which Marcy used a chainsaw to shore the vines down to the root stock, knowing that Chardonnay grows back like a strong weed. By sawing off the grafted vines, he brought them back to a unique clone, developed by UC Davis, known as Davis 108 that is considered a late-ripening chardonnay. With lemon, oak and a hint of yeast aromas, this wine had an encompassing, fill your entire mouth feel that tasted of abundant lemon and lemon zest with a subtle oak finish.

Another family winery that shares the responsibilities with their children, Bergstrom Wines focus only on Pinot noir and Chardonnay. Son Josh Bergstrom makes the wines and this chardonnay is one of the most expensive offerings in the Willamette Valley. With heady aromas of earth coupled with mild lemon, this was the least interesting chardonnay in the line up.

Overall, the panel discussion, audience questions and a concentrated tasting of wines made by a number of well-respected winemakers, proved to be an interesting Feast Portland session. Certainly at least some in the audience were converted from Anything But Chardonnay drinkers to Let’s try some Oregon Chardonnay drinkers.

With the resurgence of interest in Oregon Chardonnay wine, Mimi Casteel of Bethel Heights Vineyard, put it most eloquently, by stating that, “Chardonnay in Oregon is a quiet, beautiful, elegant thing.”